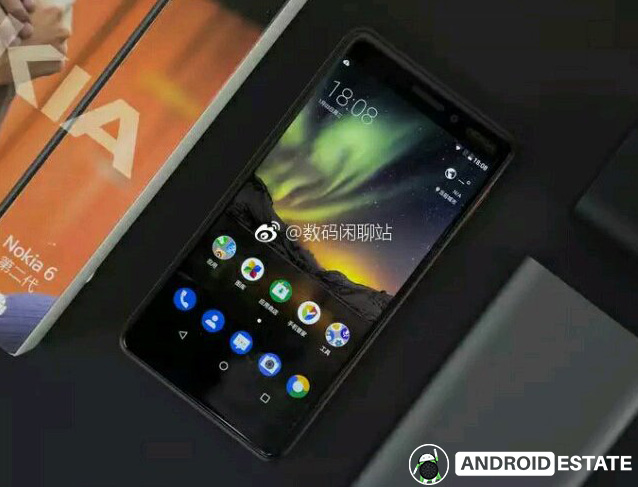 Nokia 6 will be officially unveiled on January 10 in China. This will be the first phone from HMD Global this year. This is a Successor to the much-received phone, Nokia 6 (2017).

Rumors already told us everything about of the Nokia 6. This mid-ranger from HMD Global seems bit outdated with its 16:9 display and huge bezels. The companies intention was quite clear that it wants to bag some more money under the name “Nokia” because this upgraded version of Nokia 6 is very similar to its predecessor.

The only place where there are major changes is its hardware.

The new device features a Qualcomm Snapdragon 630 processor which is an upgrade over its predecessor’s Snapdragon 430. The RAM too has got an upgrade from 3GB to 4GB. This Phone is available in 2 variants: 32 GB and 64 GB. Android Nougat 7.1.1 out of the box and expected to receive an Oreo update sometime soon.

The Fingerprint scanner is now located in the rear, much similar to Xiaomi and Pixel devices. HMD Global also decided to remove capacitive keys and replace them with on-screen buttons. This makes the situation a little weird because, instead of having huge bezels at the top and bottom, the company could have made this phone a bezel-less device or put the front facing speakers, but Nokia has done neither of them which is quite disappointing.

The Camera department hasn’t got any upgrades over its predecessor. Nokia 6(2018) packs the same 16-megapixel rear camera and 8-megapixel front facing/selfie camera.

The screen on the second generation is also the same as the last one. It’s a 5.5-inch full HD and Nokia’s decision to stick with a 16:9 is disappointing and intriguing as the company has not talked much about it.

The second generation Nokia 6 is exclusively available in China and Global availability is not yet revealed.

Continue Reading
Advertisement
You may also like...
Related Topics:Nokia 6